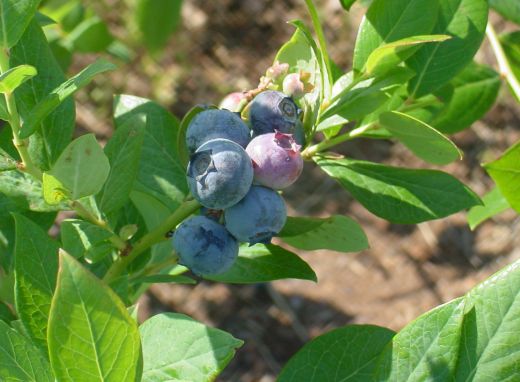 Suziblue is an early season southern highbush blueberry that flowers and ripens about the same time as Star and one week later than Rebel. Suziblue plants are vigorous, precocious and have a semi-spreading bush habit with a medium crown. Leafing has been very good, even following mild winters. Plants can hold older leaves through the winter in south Georgia.

Suziblue is suggested as a main season southern highbush variety where firm, large fruit is desired. Suziblue berries are similar in appearance to Star and Rebel fruit, but Suziblue has better berry firmness, size and overall superior cropping than Star and larger berry size and better overall flavor than Rebel.

Plants of Suziblue are self-fertile, but using a companion variety to enhance pollination and berry size is recommended. Rebel is suggested as a companion.

Suziblue has performed very well in trials in both south and middle Georgia, and test plots in California have shown it to be very productive there as well.

Suziblue was selected in 2002 at the Georgia Experiment Station in Griffin, Ga., from a group of seedlings of the cross, Star X TH-474, planted in a nursery in 1999. Suziblue has been tested as selection TH-730 at multiple sites in middle and south Georgia since 2003.

In the Griffin location, berry weight of Suziblue has been larger than Star, averaging 2.2 to 2.8 grams per berry compared to 1.5 to 2.2 grams per berry for Star. Suziblue berries grown in Griffin also had a noticeably sweeter flavor than Rebel berries, which have a mild to bland flavor.