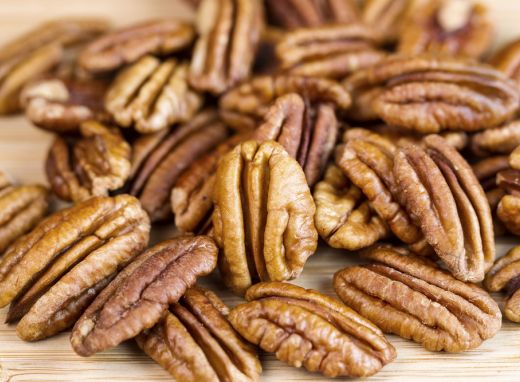 ‘Kalos’ is a new pecan (Carya illinoinensis) cultivar released by the University of Georgia College of Agriculture and Environmental Sciences. ‘Kalos’ produces good yields of large, high-quality pecans. ‘Kalos’ matures in early October in southern Georgia. Nuts produced by ‘Kalos’ are easily shelled into complete halves, and the kernels have a light golden color. ‘Kalos’ has moderate resistance to pecan scab (Venturia effusa), with low levels of disease symptoms in orchards using fungicides to control this disease. ‘Kalos’ is recommended for planting in the southeastern United States in orchards that will receive fungicide applications.

In 2003 the cross 03-6 (‘Sioux’ × ‘Desirable’) was made by Patrick Conner at the University of Georgia Tifton Campus. ‘Sioux’ is a 1962 U.S. Department of Agriculture release that is notable for its light kernel color, excellent shelling ability, and vigorous growth (Conner and Thompson, 2003; Madden, 1974; McEachern, 1998). ‘Sioux’ was at one time recommended for planting in Georgia (Goff, 1999), but large plantings were not made because the nut size is too small (6.2 g) to bring maximum prices (Conner and Thompson, 2003). ‘Desirable’ was the most planted pecan cultivar in Georgia for several decades (Sparks, 1997). Attractive traits of ‘Desirable’ are large nut size, consistent bearing, light kernel color, and excellent shelling ability into complete halves. Unfortunately, ‘Desirable’ has become extremely susceptible to pecan scab disease, caused by the fungus Venturia effusa, and is therefore no longer recommended for planting in southern Georgia, where scab is more prevalent (Wells and Conner, 2015). Cross 03-6 produced 205 nuts from which 124 seedlings were transplanted into a seedling orchard after growing the seedlings in pots for 1 year and removing those with symptoms of pecan scab on the foliage. Seedlings were transplanted into the seedling orchard in 2005 on the Tifton Campus. ‘Kalos’ was tested as Ga 03-6-32 and first fruited in 2008, when it was selected for its large size (46 nuts/lb) and high kernel percentage (60%). ‘Kalos’ was propagated for yield trials in 2009.