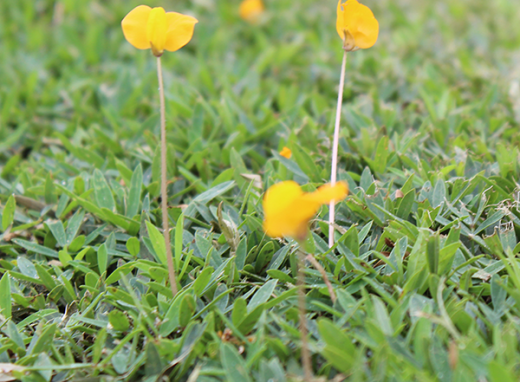 The University of Georgia-bred ‘Cowboy’ perennial peanut plant doesn’t produce edible peanuts, but this new cultivar offers homeowners a colorful addition to ornamental beds and a supplemental source of nitrogen for surrounding grasses.

UGA scientist Wayne Hanna released the perennial ornamental peanut in 2015 while working on the UGA Tifton campus. He believes the cultivar’s versatility allows it to be used in multiple ways and makes it an appealing option for homeowners.

“It can be used as an ornamental and, at the same time, provides vital nutrients to your lawn or citrus orchard. You can also grow it on hillsides along roadways to provide erosion control,” Hanna said. “It is a very versatile plant that should warrant consideration.”

The ‘Cowboy’ perennial peanut produces a robust, yellow flower that’s a little darker than a normal peanut bloom. If it’s mowed regularly, the peanut plant will flower proficiently. It usually flowers from May through September.

If it’s not mowed regularly, the peanut plant can grow as high as 12 to 14 inches and can be cut for hay. Horses with sensitive palates may desire the finer stem and leaf over conventional peanut hay.

The plant also provides an attractive option for ornamental beds.

“Ornamental plants provide color and character to a homeowner’s lawn. With the ‘Cowboy’ perennial peanut and its distinct yellow blooms, this is an attractive option that will not only bring life to a lawn but also serve as a tremendous source of nitrogen,” said Larry Baldree, a research professional in UGA-Tifton’s turfgrass program.

The ‘Cowboy’ peanut plant is also highly drought tolerant. The plant requires moisture to become established, then it grows well, with or without water.

“Once it takes hold, it has a low water requirement. That is not to say it can live forever without water because all plants require water to live. Rainfall can provide all the water requirements it needs. It will outlast any grass on the market,” Baldree said.

Established potted plants can be planted any time of year, but it is best to plant dormant rhizomes in February and March, Baldree said.

The ‘Cowboy’ perennial peanut should be available from 1 DOG Ventures in Mitchell County, Georgia. For more information, contact the nursery at (850) 830-2644.